The Morton Broffman collection appearing at the High Museum of Art in Atlanta has generated a great deal of interest and commentary.  We provide a number of articles and broadcast information as further background on Morton Broffman's legacy in photojournalism.

The face of solidarity

By Catherine Fox
The Atlanta Journal-Constitution
Published on: January 9, 2008

It's 1965, and the country is in the throes of a social revolution.

The Rev. Martin Luther King Jr., who is leading the charge, is nearing the finish of the Selma Voting Rights March. Hand in hand with his wife, Coretta, and backed by a phalanx of supporters, he strides purposefully toward Montgomery.

Photographer Morton Broffman was there. He must have stood in the center of the road ahead of the crowd, maybe walking backward to take the picture hanging in the High Museum. The moment he captured immortalizes both the spirit of solidarity and the dignity, determination and force of moral authority written on King's face.    ...read more 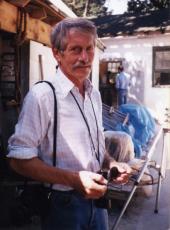 By JIM AUCHMUTEY
The Atlanta Journal-Constitution
Published on: 06/01/2008

Patti Broffman was recovering from dental work and didn't feel like going anywhere. But her son insisted; Neal had something he wanted to show her.

So one evening in May, he dropped by her Brookwood condo and drove her a few blocks south to the High Museum of Art. On the front of the building was a 20-foot-tall banner depicting the Rev. Martin Luther King Jr.

Patti Broffman recognized the image immediately. It was a photograph her late husband had taken at the end of the 1965 voting rights march from Selma to Montgomery. She had urged him to go to Alabama, even if he had to phone in sick to work, and she had taken him to the train station in Washington.   ...read more

Road to Freedom: Photographs of the Civil Rights Movement, 1956-1968 Opens at High Museum

ATLANTA.- The most significant art-museum exhibition devoted to photography of the Civil Rights Movement in more than two decades premieres at the High Museum of Art in Atlanta. "Road to Freedom: Photographs of the Civil Rights Movement, 1956–1968" will include unforgettable images that helped change the nation, increasing the momentum of the non-violent movement by dramatically raising awareness of injustice and the struggle for equality. Consisting of approximately 200 photographs—many of which have never been on public display—"Road to Freedom" will be drawn primarily from the High's permanent collection, which contains one of the most comprehensive holdings of Civil Rights–era photography in the country. The exhibition will coincide with the fortieth anniversary of the death of Dr. Martin Luther King, Jr.  ...read more

For most sons, their dads are personal heroes. When Morton Broffman died, his son, Neal, wanted the world to know how important his father was. Through a chance encounter, Broffman's photography is now on display in the High Museum's Road to Freedom exhibit. WABE's Philip Graitcer spoke with Neal about his memories of his father and getting his work into the public eye.